A taste of spring

We have officially entered my favourite season of the year — SPRING! Whenever I travel to Japan during the spring season (March to May), one of the many mandatory activities in my itinerary is Hanami or cherry blossom viewing.

My first Hanami experience was the most memorable because it was the first time I came across the sakura-flavoured soft serve. Anything sakura-flavoured intrigues me and I just got to try it. I hope that after reaching the end of this page you would run to the closest Japanese snack store when you can and grab yourself one of these must-try sakura-flavoured snacks. 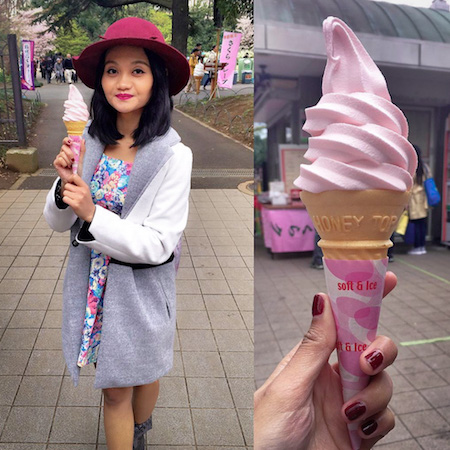 Before I had my first scoop of the sakura-flavoured soft-serve, I was sceptical as I did not know what to expect, but after having some, my tastebuds were dancing with delight. If I had to put it into words, sakura flavour has a subtle sweet flowery taste with a slight hint of cherries. You can get yours at one of the best places for Hanami — the Shinjuku Gyoen National Garden.

Starbucks Japan releases limited edition and seasonal food and drinks all year round. But arguably, the most awaited one is their spring menu which features a selection of sakura-flavoured treats. This year, they've released sakura-flavoured chiffon cake and doughnut — a delectable combo for sweet-toothed individuals.

If it's your first time in Tokyo, I would recommend visiting the Starbucks in Shibuya which has a view of the iconic Shibuya Crossing. Enjoy a drink while you immerse yourself in the beauty of Tokyo's buzziest neighbourhood.

Glico is a Japanese food company headquartered in Osaka. One of its world-famous snacks is Pocky. Occasionally, they release limited-edition flavours. Sakura Pocky is the limited flavour for spring! The fragrance of the sakura-flavoured pocky sticks is similar to that of their strawberry-flavoured Pocky but with an added hint of cherry. The taste, however, is subtler compared to their Strawberry Pocky, and is also more flowery. You can get these in any snack store in Japan but I suggest going to one of my favourite stores in Tokyo, Niki no Kashi in Ameyoko, as they have good selections. 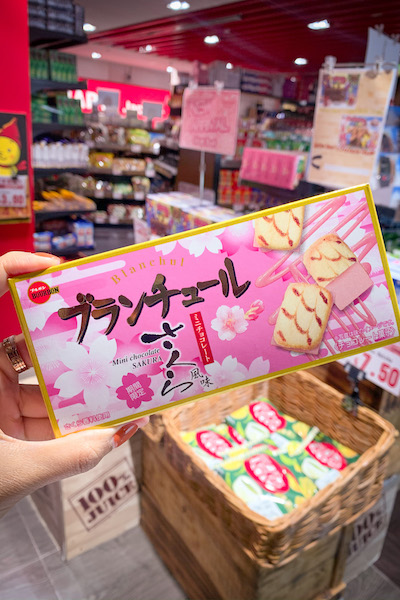 Bourbon was born in Niigata — the capital and the most populous city of Niigata Prefecture located in the Chūbu region of Japan — in 1924.  I love the Alfort Mini Chocolate Biscuit. I discovered this snack thanks to an AirBnB host who included this as part of a "welcome" snack package when I first arrived in Tokyo. I always buy at least two packets of the Bourbon’s Alfort Mini Chocolate Biscuits every single time I visit Japan because it is just that tasty.

It's also very fragrant and I immediately fell in love with its flowery flavour. The other flavours, Strawberry Chocolate and White Vanilla, are also very yummy. You can get these at any Don Quijote, Niki no Kashi or snack stores around Japan.

Calbee is another Japanese food company founded in Tokyo and is one of the most recognised brands in supermarkets around the world. One of my favourite crackers from Calbee is their prawn cracker. Its sakura-ebi flavoured shrimp cracker did not disappoint and tasted very close to their original prawn cracker! While it doesn't contain the sakura flower, it's made of this special shrimp caught in spring called sakura-ebi. It's light and crispy, which I loved. Overall, I enjoyed the touch of refreshing sweetness in this prawn cracker.

You can get this from any convenience store in Japan. You can head to Don Quijote which houses anything and everything you can think of — from snacks, household items, beauty products and more.

Indulge In Your Fast Food Faves At Home With These Recipes

Quick And Easy Drink Recipes To Refresh You This Season