When Cinderella becomes a sleeping beauty

The new normal calls for new routines. In this series, #TeamClozette shares their journey of making healthier habits a new way of life.

No mind will be blown away by the fact that getting adequate sleep will improve your well-being. We all know this, and yet many night owls — myself included — can’t seem to make a habit of it. We’re too tired to wake up early in the morning and too energised to sleep early at night. Rinse and repeat. It seems like there’s no hope for a night owl to thrive in an early bird world, but there are ways to cope. Ahead, know why night owls have a hard time waking up early and learn sleep tips and habits from someone who tried it and has switched to the (early morning) light side.

Why night owls have a hard time waking up early

Night owls are often branded as lazy, but that judgement is a little unfair. In truth, the predisposition to waking up late may have less to do with laziness and more to do with one’s internal clock which just happens to run a little later for night owls compared to early birds.

This tendency to fall asleep later in the night can cause “social jet lag”, a term coined by researchers at Ludwig-Maximilians University to describe the mismatch between your own internal clock and the socially accepted “normal” schedule. For example, a night owl who feels sleepy later in the night but needs to wake up early for work will not be able to get adequate slumber time, causing drowsiness throughout the next day — just like what one would experience from a timezone jet lag.

Decreased alertness during the day is just one of the setbacks of trying to follow an early bird schedule as a night owl. Regular sleep deprivation can lead to a cocktail of health problems including increased risk for diabetes and cardiovascular disease.

What’s more is that the act of staying up late itself can cause problems even if you get a full night’s sleep. A recent study of 18,039 adults in Finland found that “eveningness” or being more alert or active in the evening increases risks of depressive and anxiety symptoms.

The act of staying up late itself can cause problems. (Photo from: George Gvasalia via Unsplash)

“Sleep timing is as important as duration. Our circadian rhythms govern our brain and body’s alerting signals which rise and dip at different times of the day. Sleeping outside of these biological fluctuations (deviations are known as circadian misalignment) have implications for physical and cognitive health,” Ruth Leong, a research fellow at NUS Yong Loo Lin School of Medicine explained. “Acute circadian misalignment can impact next day work performance and physical fitness. This is because the biological systems in our body are all governed by rhythms which they must adhere to in order to function optimally.”

Being a night owl doesn’t mean sleeping at 2AM

Regularly staying up until the wee hours of the morning? That can be a result of bad sleeping habits and not just about being a night owl. Social pressures in the modern day can “weaken and/or conceal biological drives in the evening, leading individuals to delay their bedtime and shorten their sleep,” according to a 2016 study.

“Even for night owls, the ‘biological night’ is not that much later than individuals who have intermediate rhythms. Individuals who are truly extreme night owls are very rare. Very late bedtimes even for night owls are often more due to social and work demands than biological rhythms. If the night owl has a fixed wake time, they definitely should try to sleep early to get sufficient hours of sleep,” Ruth Leong said.

Guilty as charged, I have often rationalised my habit of staying up late by telling myself that it’s just because I’m a night owl. It’s not until now that I’ve considered that maybe my sleeping habits need a little bit of fixing. And so I embarked on a journey towards better sleep. The shift from being someone who sleeps late to becoming a person who actually loves mornings took about two weeks so it really does take a lot of patience and consistency. Here’s what I, a night owl, did to become a morning-ish person.

(Photo from: David Mao via Unsplash)

It has become so easy to delay sleep with all the entertainment options that we have now. Even if I already feel sluggish at around 11PM, that feeling is quickly overridden by the excitement I get with watching a riveting show. “Just one more episode,” I tell myself until it’s already 12PM and I’ve yet to brush my teeth. So during the first day of my night-owl-to-morning-person journey, I did my night routine earlier. When sleepiness stroke at around 11:30PM, I tucked myself into bed and — surprise — I actually dozed off quite easily.

My original plan was to follow a popular advice and sleep earlier by increments. While that could be ideal for some, for me, going “cold turkey” on delaying sleep did the trick.

We usually plan our days by starting to schedule the activities we’ll do in the morning, but I found that planning your schedule backwards is actually better because you’re starting with a goal (sleeping early) and working out the steps you need to achieve it. 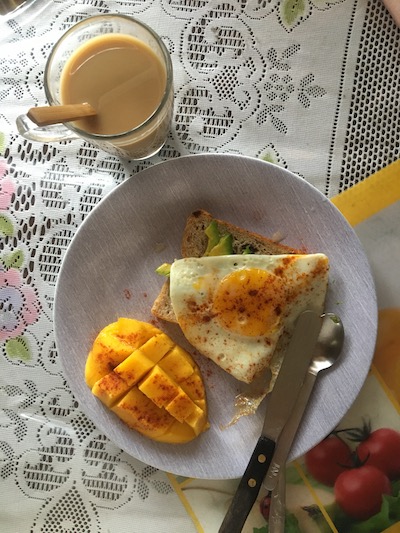 I had time to make breakfast with a schedule planned backwards.

For example, if I want to sleep at 11PM, I would note down on my planner that I would need to be in bed by 10:30PM, which means I need to shower and start my night routine by 9:30PM, so I need to have dinner by 8PM at the latest and so on.

Now that most of us work from home, daily physical activities like commuting to work or socialising with colleagues have been cut down. For me, that means having some excess energy at the end of the day. I found that exercising after work helps me burn that extra energy which makes sleeping early easier. I make it a point to exercise no later than 6:30PM so I can have some proper cool down and not get too pumped up close to bedtime.

I also tried exercising with friends. Check out the story here.

Taking showers in the morning is not a pleasant activity for me, but it’s something that I tolerated since I was a schoolgirl. However, I realised that showers at night have the opposite effect on me — they feel relaxing and calming and so I added them to my winding down routine.

Bouncing back from a relapse

Habits are hard to break so it’s inevitable to experience a relapse, but the important thing is to learn how to bounce back. “Deciding to form good sleep habits is a really great goal to set, and it is definitely not easy. There are often many things we cannot control — work demands, kids, life stuff. It can be pretty frustrating,” Ruth Leong said. “It would help to keep a journal or a record of bedtimes and wake times; sleep trackers can be quite helpful. It would also be helpful to have a group of friends to journey with in the quest for better sleep.”

Whenever I relapse, I take note of what caused it and find a way to work through it. One instance was when I had a really good video chat with a friend so I just stayed up and continued bonding with her. It was a great experience but the next time I caught up with her, I made sure to do it earlier and let her know that I’m on a quest to fix my sleeping habits.

Catch up on sleep smartly

Ruth also shared that catching up on sleep smartly can be a good way to reset. “If you cannot sleep longer on weekdays, sleeping more on weekends is better than being sleep restricted for all seven days of the week. Sleeping sufficiently everyday would be ideal but often very difficult,” she said. “Another practical way to recover from short nocturnal sleep could be to squeeze in an afternoon nap (target 2-3PM for 30-60 minutes).”

On their own, each of these things that I did to become a morning person seems minute but adding them all up made all the difference. Sleeping early gets easier each time you do it, but the catch is you have to stick to it and do it regularly — no matter how enticing Netflix’s selections are.

Curious about intuitive eating? Here’s what it’s like to try it.

Should You Wear Pyjamas To Bed For Better Sleep? These Signs Say Yes

Tips For Raising Awareness Online For Breast Cancer This Month

This Menstrual Cup Is Perfect For Women On The Go

From Healthy Hair To Strong Bones: Your Quick Guide To Vitamin Supplements

The Joys & Sacrifices Of Being A Fangirl

3 Homeowners On Turning A House Into A Home