Looks that are not just for Halloween

ICYMI, Squid Game costumes are having an interesting effect in recent fashion trends. This follows the hype that manifested in its well-received season finale as well as its role in launching the fame of its stars to new heights.

Green tracksuits, the main costume in the series, are currently a Google breakout search term. White Vans slip-ons, which completes the Squid Game look, reportedly increased up to 7,300% in sales following the success of the series. Sales for white slip-ons in general have also increased up to 97%. While the streaming giant has released official Squid Game apparel, it’s no surprise that people still want to dress up closely if not exactly as the show’s characters.
Ready to join the Squid Game fashion train? We curated five outfit ideas inspired by Squid Game costumes you can try out not just for Halloween but also for your day-to-day look.

Details play a huge role in Squid Game’s plot and the costumes bear the most symbolism. The green tracksuit worn by the players of the game is inspired by a political initiative in South Korea during the 70s, where children were required to wear a similar attire during field days. Just like the real-life childhood games that inspired the levels of Squid Game, the costumes are meant to be nostalgic. The uniformity of the look, despite the players’ differences in race, age, and background, can also reference one of the series’ most popular lines, “Everyone is the same.” 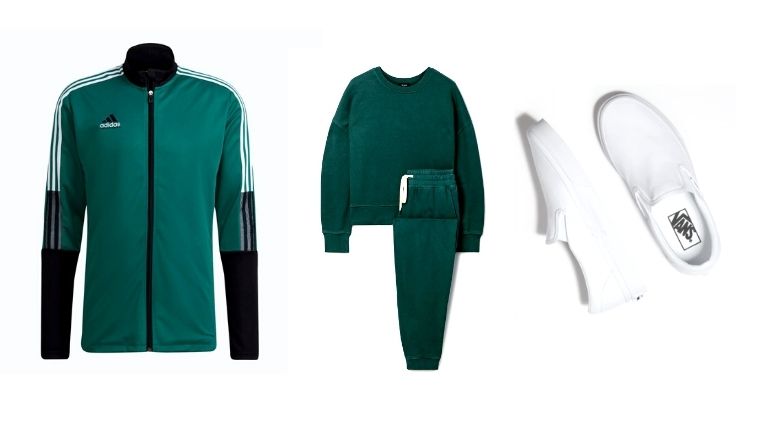 We’re keeping things simple with a green and white track top matched with sweats of the same colour to keep it consistent with our reference. The white Vans slip-ons make this an almost-perfect recreation of what’s seen on the series.

Squid Game players’ red — or is it pink? — boiler suits

There seems to be a confusion on what colour the Squid Game’s guards’ outfits actually come in. One theory suggests that they’re red, referencing the ‘red versus blue’ game hosted by The Salesman to recruit the players (and possibly, the guards). However, it may also be hot pink considering how the lighting on the show can somewhat alter the true colours of the costume — just like how the tracksuits are green not blue. Squid Game’s Art Director actually revealed that it’s pink, referencing the fairytale-like aspect of the sets, but it looks like the internet’s still half-and-half about the look. 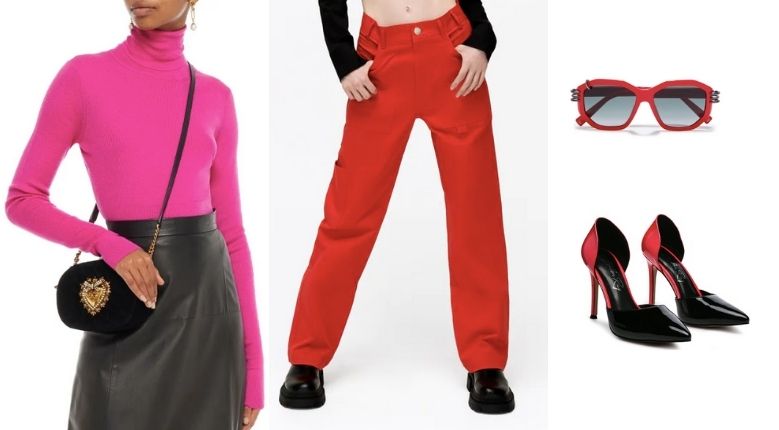 To settle the score, we decided to go for a mix of both colours. We went with something that’s chicer and more structured to show a distinction from the comfy athleisure vibe of the first look. The guards’ outfits cover theirs so we went with a pink turtleneck top. Then we went with red cargo pants to mimic the functionality of the boiler suits from the series, which were intentionally designed to have multiple pockets since the guards have to carry around equipment and weapons with them all the time. We also picked out a sunglasses frame that is a bit angular, embellished with small rings in reference to the shapes in the guards’ masks. Wrapping up the look are two-toned black-and-pink stilettos that match the colour story of the ensemble.

Aside from the players’ and the guards’ looks, another outfit that stood out from the series was the Red Light, Green Light doll’s look. This doll, which was featured only in the pilot episode and the first level of Squid Game, counts as a main cast member to us. It also has been the subject of many memes. 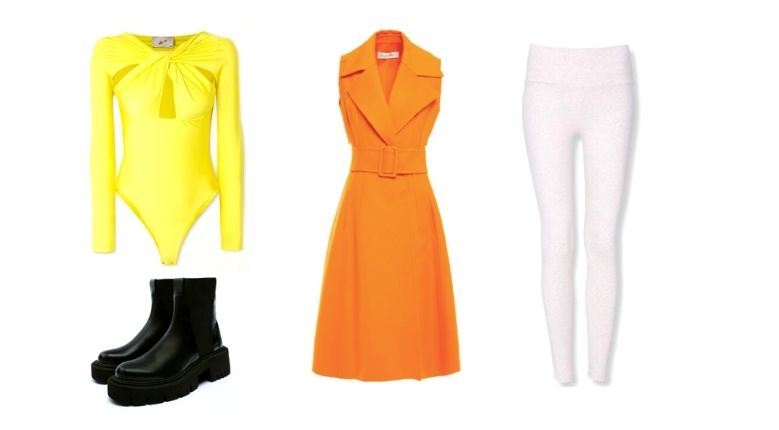 But for our outfit curation inspired by her look, we’re going for a more ‘adult’ but still preppy approach. We’re swapping her collared-shirt-and-A-line dress combo with a bodysuit and belted dress pairing for a sleeker look. We’re also replacing her knee-high socks and Mary Janes with a pair of leggings and ankle boots to give the look an elevated and more sophisticated appeal. 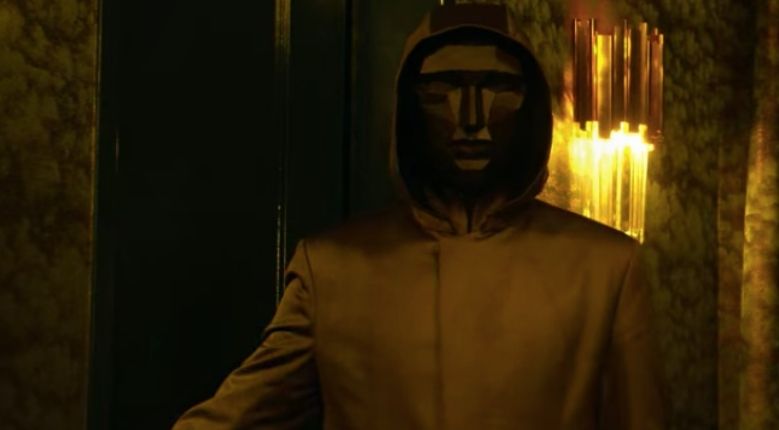 The Front Man’s identity is one of the biggest mysteries in the series and his all-black outfit definitely adds more to his mysterious aura. 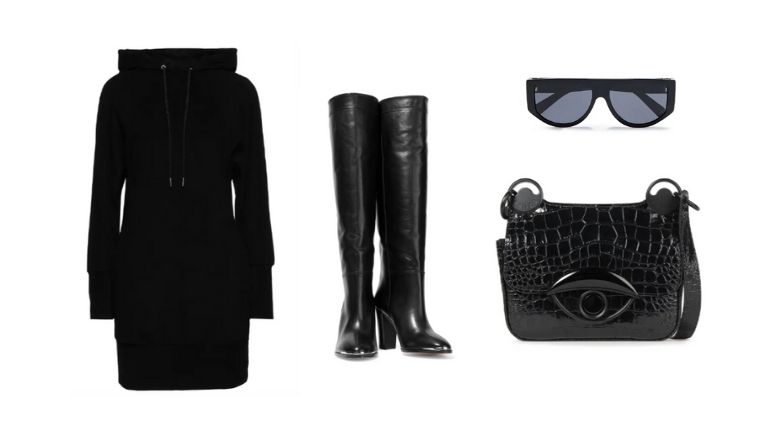 To recreate his look, we went with a hooded midi dress that has a cloak-like silhouette matched with thigh-high boots. The D-frame sunglasses are our version of his mask, which is sleek and straightforward in design (representing the Front Man’s own personality, which sets him apart from the guards or the players). To cap things off, we’re adding a sling bag embellished with a croc-style pattern  that represents The Frontman’s connection to the VIPs who wear animal masks and an eye design that symbolises how his character is an overseeing eye to both the players and the guards. 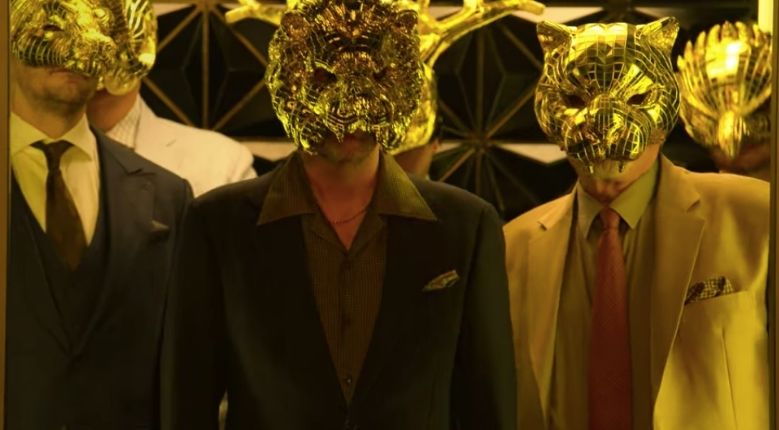 The VIPs represent both the extravagance and harshness behind the purpose of Squid Game, making them one of the biggest antagonists of the show. They’re most distinguishable through their gold masks inspired by various animals — the tiger being the most memorable. 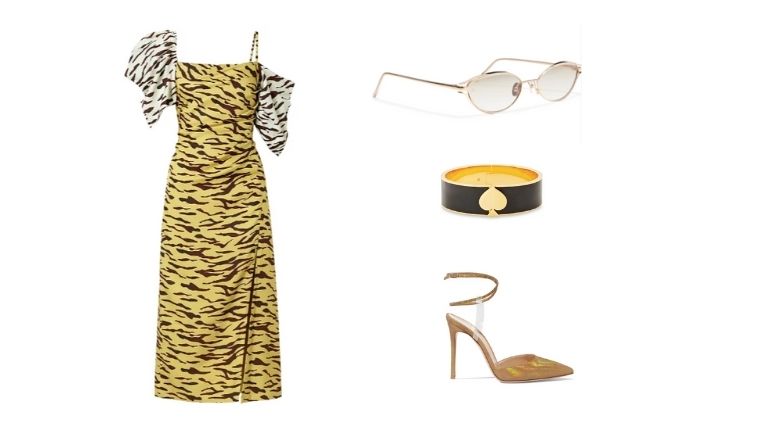 Taking inspiration from the tiger masks worn by the characters, we recommend a tiger print dress and opulent accessories. Which series or film do you think will have this massive effect in fashion next? Make sure to watch this space for more outfit curations inspired by our favourite shows.
(Cover photo from: @netflix.kr)
Wondering what to watch next after Squid Game? Check out these October Netflix releases.
READ MORE ON THIS TOPIC
RELATED STORIES
fashion . Styling Tips

Style Smart: How To Do Preppy Style Right