To All The Boys I've Loved Before Book Review: The Missed Opportunity | Clozette
lifestyle . Art

Rewind & Review: What 'To All The Boys I've Loved Before' Could Have Been

The book that started it all

Gain a new perspective as we look back at iconic films, books and TV shows in our Rewind & Review series, where we appreciate the roles they have played in their time and reimagine iconic scenes in today's narrative.

"It's not like in the movies. It's better, because it's real."  — Jenny Han, To All The Boys I've Loved Before

First things first: to avoid confusion, we want to make it clear that this is a review of the To All The Boys I've Loved Before book and not the movie adaptation. The book released in 2014, one of Jenny Han's most popular young adult novels, gained nominations from the Pennsylvania Young Readers' Choice Award for Young Adults, and Lincoln Award. Beyond critical acclaim, the novel gained a huge fanbase on BookTube, Instagram and reading social websites like Goodreads.

At the time of its release, the young adult section was dominated by science fiction and supernatural themes. To All The Boys I've Loved Before, with its average, relatable teenage protagonist and relatively simple plotline was a refreshing change in a sea of dystopian books. Its popularity was amplified when it was adapted as a Netflix Original starring Lana Condor and Noah Centineo.

But could it have been something more than just another book about teenage love? Don't get me wrong, it is a cute story. However, it could have been a great one — had the story focused on Lara's growth and her relationship with her sisters.

For those who have seen the movie but are curious about the original material: the movie and the book have some subtle but significant differences. In the novel, Kitty is a lot more vindictive — she sent out Lara's letters for revenge rather than as a ploy for her sister to find a boyfriend; Peter isn't pining for ex-girlfriend Gen; and most importantly, Josh develops feelings for Lara and they kissed and hid it from big sister Margot who used to date — and implied to still be in love with — Josh. When the truth came out and Margot learned about the kiss accidentally, things quickly turned sour between her and Lara.

For all of To All The Boys I've Loved Before heroine's loveable traits, her one often-overlooked major flaw is that in the course of the whole story, she never changes. Yes, she goes through many misadventures — from getting into a faux relationship to save face and eventually falling in love for real — but as a character, she is stagnant throughout the book. Things happen to her, but weirdly enough they don't change her as a person. Lara Jean is someone who has a habit of repressing her true feelings — it's the reason why she writes these secret passionate love letters in the first place — and until the very end, she never overcomes them even though she's clearly tired of concealing things.

The turning point for her could have been being honest with Margot when she and Josh kissed (spoiler alert if you haven't read it or seen the movie!). It would have shown her budding maturity and prevailing love and respect for her sister instead of hiding a major thing yet again. She could have owned up to the mistake and explained her feelings to her sister. This is how we reimagine the first scene of Chapter 55, with the help of Singaporean illustrator Josephine Tan, should have been. In the original text, Josh tries to talk to Lara about explaining what happened to Margot but Lara insisted on keeping it a secret.

In our version, a Lara Jean who's been made more mature and open by all the things that happened to her takes accountability, tells the truth about what happened and finally expresses her feelings instead of repressing them. 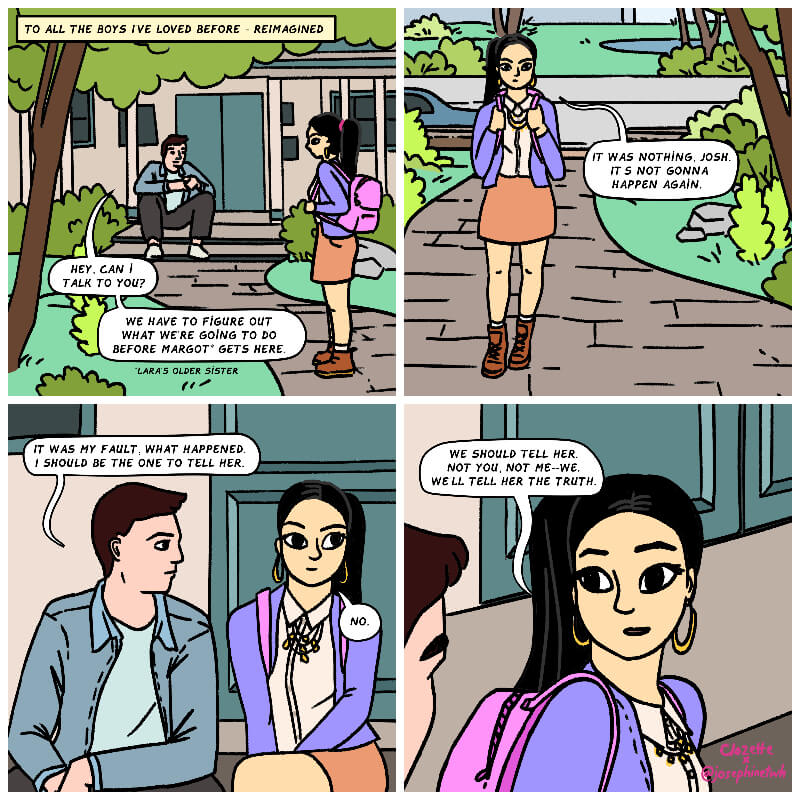 The missed opportunity: More than a love triangle

But it's not just Lara's actions towards her sisters that need reckoning. If you think about it, all the fiasco happened because of Kitty who wanted to exact revenge on her sister. A few chapters later, Kitty admits to her wrongdoing, but it was quickly resolved. In real life, it's something that we all know would spell big trouble and could cause a major rift. In just two chapters, the conflict between Lara and Margot is already resolved.

When rearranged so that the book would open at a timeline when Lara is already in a fake relationship with Peter and the climax being Kitty's confession, the latter part of the book could have been dedicated to the two sisters mending their relationship. When you add Margot's homecoming into the mix, things get even more interesting.

In the novel, the love triangle formed between Josh, Peter and Lara is played off very romantically and didn’t dive much into what the repercussions will be if you become secretly romantically involved with your sister’s ex-boyfriend. We need more stories that explore the special bond between sisters. There is nothing wrong with a love triangle story, but we already have a lot of those.

To All The Boys I've Loved Before succeeded excellently in portraying the normal teenage girl and her daily life. Protagonist Lara Jean is someone that’s easy to relate to. Finally, ordinary teenage girls can see themselves represented. Lara isn’t living in a fantasy world; she’s not a teenage witch or in love with a vampire or the “chosen one”, she’s just your typical teenage girl going through the same things the readers are currently experiencing (or for older readers, have experienced).

It recognised that a teenage girl's everyday struggles are worthy of discourse and not something that should be just brushed off as youthful folly. It respects not just the youth, but also their psychology. Asian-Americans also got representation through Lara Jean who is half-Korean. Readers the world over got introduced to her South Korean mother's culture — from the food to the traditions. Along with Eleanor & Park, To All The Boys I've Loved Before is one of the few young adult books that showcased Asian heritage and what it's like to be a minority in a white-dominated country.

The Weird: Rooms for improvement

However, it sometimes does lean heavily on her Asian heritage when she was supposed to be a "hapa" (or a person who is partially of Asian or Pacific Islander descent). For example, in Chapter 43, Lara thought about how there are “very limited options for Asian girls on Halloween.” One could not help but wonder, why she’s not written as an Asian-American with full Asian ethnicity if the novel were going to lean into her Asian ancestry. Or on the flip side, it could have dived more into her situation and struggles as a hapa, like how hapas often share how they feel as if they can’t connect with either of their cultures because they are not “Asian enough” or “White enough”.

On a related note, it's also strange how Lara Jean is never linked to an Asian love interest and it has raised discussions of Western media perpetuating the desexualization of Asian males. Considering that Lara Jean sends out multiple letters to different men, it’s strange that not one of them was Asian. Lara Jean supposedly lives in Virginia which had a population of over 400,000 Asians in the early 2010s.

In an interview with IndieWire, author Jenny Han says this about the matter: “There are so many people that want to tell stories. I think that the issue is how hard it is to get your foot in the door to tell your stories. For me, I just want to support people in telling the stories that they want to tell, and I would hope that with this movie and Crazy Rich Asians, that if it does well, then we’ll get more.” We'll let you read between the lines.

Nevertheless, To All The Boys I've Loved Before made some major strides in giving the Asian community a spotlight in popular culture and it should be appreciated for it. If anything, it's a strong stepping stone that signals to everyone that teenage girls are more than just the ditzy persona portrayed frequently in pop culture.

The Story Behind My Favourite Tattoo

This Is What Happened When I Got My First Tattoo

I Am Her: Cheryl Ann Spencer On Pursuing A Career In Music As An Adult