What You Need To Know About DJ MIJA | Clozette
lifestyle . Interview

What You Need To Know About DJ MIJA

Before she rocks Road To Ultra Singapore

At this day and age where the creative and entertainment industries are at its peak, we focus our eyes on one career type that is as rare as finding the perfect bright red lipstick--spinning. Spinning or more commonly known as DJ-ing has been alive since the disco fever arrived in the 70s. What started as disco parties back in Chicago has now found its way in different parts of the world in places and events such as clubs, underground parties, raves, and music festivals. It's one whole gathering for music enthusiasts to enjoy different genres. And whether you're into pop, rock, EDM, or house, there is one person these famed events cannot live without--the DJ.

With Road To Ultra Singapore coming up on 19th September 2015, we're putting DJ MIJA under the spotlight. Know more about how she started out, her take on her chosen career path, and of course, her equally gritty and cutting-edge fashion sense in our exclusive interview with this EDM star herself.

What’s the full story behind “Mija”?

I started as a rave promoter in Phoenix, Arizona and from there learned how to  DJ. I played nu­disco, disco house at raves and they didn’t really get it at the time so I moved onto playing residency lounge type settings (restaurants, hotels) and clubs. I was invited to DJ at Bonnaroo in 2014 where Skrillex found me  playing at this art car. We played a b2b set which went viral and from there it  was up to me to keep the momentum going by killing festival sets and learning how to produce music. It’s been a crazy ride so far.

To date, what has been your favourite music festival to play at?

That’s tough because I’ve been playing some amazing festivals. So far I would  say my favourites have been Hard Summer, Shambhala, and Coachella. The  crowds I had at those events were insane.

If you could play any festival in the world, what would it be and why?

ADE or Glastonbury! Mostly because I’ve never played in Europe before. You’re excelling in an environment that is still predominantly male, how does it feel and what is your take on this?

I don’t think about it often, ­­only when asked in interviews. So far in my career I haven’t felt discriminated against because of my gender. At least not from my peers in the industry. I find that it’s the collective EDM audience that make a bigger deal out of it than it needs to be. I’m just doing what I love and hope that I can inspire other females to have confidence in their art and stand alongside the big dogs.

You have a very distinct beauty style. From pink to blond to aqua  green hair, what hairstyles have you not done before and are dying  to try next?

I’ve tried everything. I’ve had weird hair since I got my first job and could afford  to dye it. I really like the aqua seafoam green tho.

If you could invite any fashion designer to your gig, who would it be and what would you spin for them?

Jeremy Scott and I would play some crazy nightcore vox/trap remix of spice girls.

If you were asked to put together an office­ appropriate outfit – from top to toe – for just one day, what would be it based on your  personal style?

I don’t even like thinking about having to dress for an office. I’d just humour myself by wearing my slayter tee. 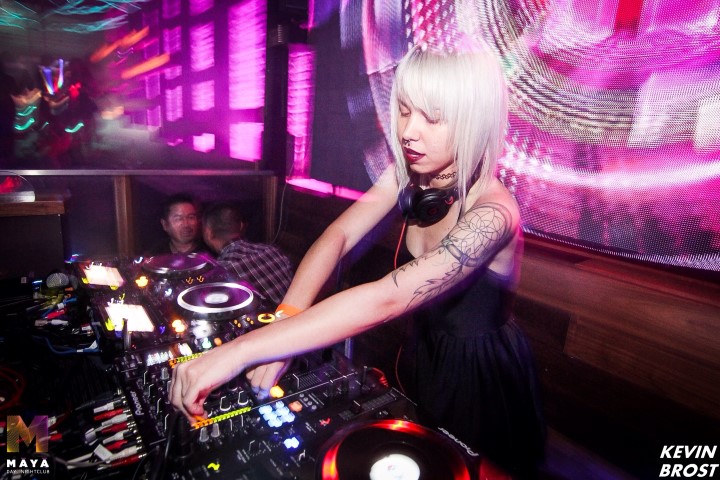 Can you give us a sneak peek of what’s to come at Road To Ultra Singapore, in terms of your music and fashion style?

I have some new music that I am definitely going to be playing. One of which is a  remix I just dropped the other day of Major Lazer ­ Be Together. As far as  fashion goes, I have some weird pieces that were gifted to me recently that I’m going to bring. Platform shoes and what not. I also want to go shopping in Singapore and wear a bunch of new stuff.

What will you be wearing to Road To Ultra Singapore?
Let us know in the comments below!
Click here for more fashion inspiration from our community
READ MORE ON THIS TOPIC
RELATED STORIES
lifestyle . Interview

I Am Her: Anisa Hassan On Bridging And Fortifying Relationships

Silent Vloggers Reveal What It’s Really Like Behind The Scenes

Why I Became A Tattoo Artist

Mum’s The World: What Motherhood Is Like In Different Countries

I Am Her: Rozella Marie Mahjhrin On Empathy & Building A Truly Supportive Community

I Am Her: Rachel Carrasco On Authenticity & Making Extraordinary Things